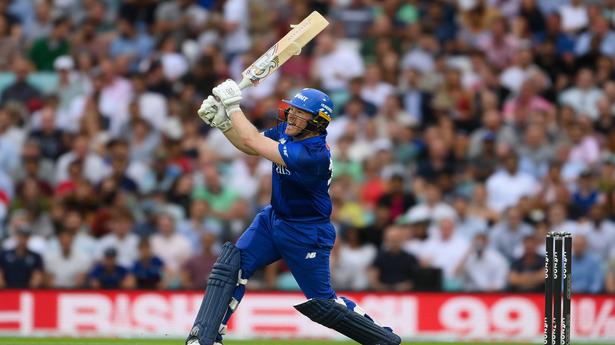 Eoin Morgan struck a quickfire 47 and medium-pacer Nathan Ellis picked up three wickets as London Spirit pipped Oval Invincibles by three runs in a nip-and-tuck contest of The Hundred on Thursday.

Coming in to bat at the fall of the third wicket, on the 37th delivery of the innings, Morgan revived the latter half of his team’s innings, stitching useful partnerships with Dan Lawrence (27, 20b) and Kieron Pollard (19 n.o., 13b) as Spirit reached 171 for 6 in its 100 deliveries.

The Invincibles were rocked early during their run chase by Ellis (3 for 28) and Jordan Thompson (2 for 31). They were 12 for 4 after 17 deliveries, before Jordan Cox (39, 30b) and Hilton Cartwright (42, 23b) led the recovery. Both had departed by the 80th delivery of the innings, with 116 on the board. Tom Curran (27, 15b) and Danny Briggs (29 n.o., 11b) kept the team in the hunt, and with 17 left to get off the last five deliveries, Briggs hit back-to-back boundaries to bring the equation down to 11 off 3. It wasn’t to be for the Invincibles, however, as Thompson, the bowler, allowed only five more runs to be scored in the last three deliveries.

Ellis was player of the match.

Manchester Originals and Northern Superchargers will clash in the competition on Friday.

The women’s competition begins on August 11.