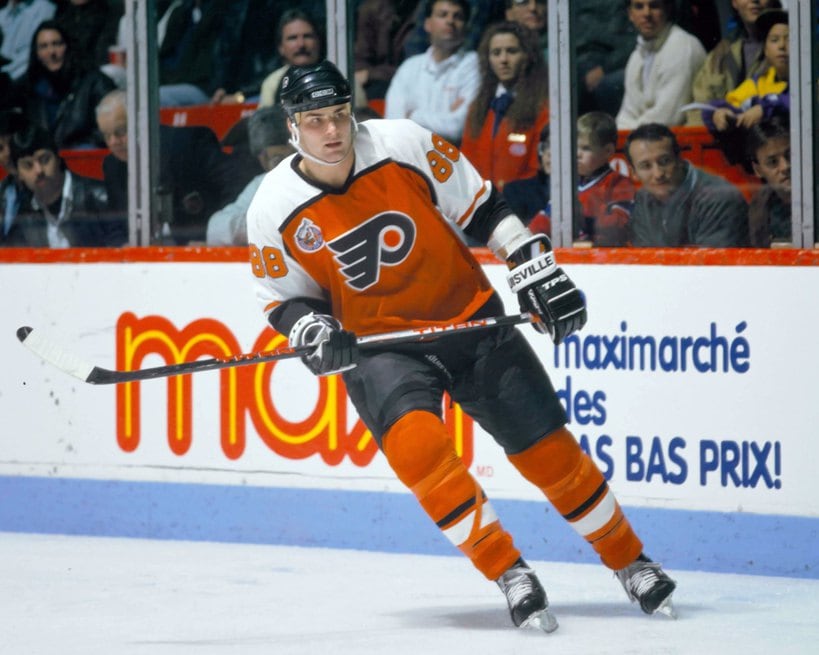 A pair of games were played on June 22, and both of them saw the winner move two within one win of the National Hockey League’s ultimate prize. This date has also seen a very memorable first-overall draft pick, the sale of an “Original Six” franchise, and plenty of moves off the ice. The THW time machine is fired up and ready to take on our daily trip through the decades.

The New Jersey Devils hosted their first-ever Stanley Cup Final game on June 22, 1995. They beat the Detroit Red Wings 5-2 in Game 3 of the Final to take a commanding 3-0 series lead after winning the first two games on the road.

Bruce Driver’s power-play goal, his first tally of the playoffs, gave the Devils a 1-0 lead midway through the first period. Claude Lemieux doubled the lead before the end of the frame. Neal Broten and Randy McKay scored in the middle frame to build up a 4-0 lead before Bobby Holik gave the Devils a five-goal advantage with a third-period power-play tally.

Things got rather feisty during the final frame as the two teams combined for 32 penalty minutes, including eight roughing minors. Sergei Federov and Steve Yzerman scored late power-play goals for the Red Wings, but they could not mount a serious comeback.

The Chicago Blackhawks beat the Boston Bruins 3-1 on June 22, 2013, in Game 5 of the Final, to take a 3-2 series lead. Patrick Kane was the hero with a pair of goals, his eighth and ninth of the postseason. The first came late in the opening period, with the eventual game-winning goal coming early in the second frame.

Zdeno Chara made things interesting with a goal less than four minutes into the third period, but the Bruins could not get any closer. Dave Bolland iced the game with an empty-net goal in the final seconds of the game. Blackhawks goaltender Corey Crawford, who gave up five goals to his glove side in the previous game, rebounded with a big 24-save performance to get his team to within one win of the Stanley Cup.

On June 22, 1991, the 22 teams of the NHL got together in Buffalo, NY, for the annual NHL Entry Draft. The Quebec Nordiques used the first overall pick to select Eric Lindros, despite him saying he doesn’t want to play for them. Lindros lives up to his word and sits out the entire 1991-92 season before being traded to the Philadelphia Flyers.

Toronto hosted the NHL Entry Draft on June 22, 2002, with the league’s 30 teams making nine rounds worth of draft picks. The Columbus Blue Jackets had the first pick overall, and they used it to select Rick Nash. He scored 289 goals and 547 points, both franchise records, in 674 games for the Blue Jackets before he was traded to the Rangers in 2012.

Mike Ilitch purchased the Red Wings on June 22, 1982, and took them from the “Dead Wings” era to becoming a model franchise for long-term success. Ilitch, the founder of Little Caesar’s pizza, bought the team from Bruce Norris, whose family had owned the team since 1932.

The Red Wings won four Stanley Cups and built a brand-new, state-of-the-art arena with Ilitch at the helm. He also purchased the Detroit Tigers in 1992 and not only got them back to respectability but got a new ballpark built for them as well.

A Busy Day in Vancouver

On June 22, 1991, the Canucks acquired Dave Babych from the Minnesota North Stars in exchange for Tom Kurvers. The veteran defenseman played in seven seasons with the Canucks and was a big part of their run to the 1994 Stanley Cup Final.

They made more news on this date in 1998 when they named Brian Burke their new general manager. He helped the franchise get back to winning and becoming a draw at the box office during his six years in charge. He drafted Daniel and Henrik Sedin, Kevin Bieksa, and Ryan Kesler, who became a big part of sustained success in Vancouver.

The Montreal Maroons withdrew from the NHL on June 22, 1938, leaving just seven teams left in the league. Financial difficulties led to the two-time Stanley Cup-winning franchise to suspend play. Despite efforts to revive the franchise, the Maroons officially called it quits in 1947.

On June 22, 1977, John Ziegler was named the fourth president of the NHL, taking over for Clarence Campbell. He held the role for 15 years and helped the league expand by absorbing four teams from the defunct World Hockey Association in 1979. He also helped put the wheels in motion for the major expansion the league saw during the 1990s.

The Penguins named Eddie Johnston as their new head coach on June 22, 1993, replacing Scotty Bowman. This was his second stint as Penguins’ head coach, having spent three seasons behind the bench in Pittsburgh a decade earlier. He won 153 games over the next four seasons and took the Penguins to the Eastern Conference Finals in 1996.

Mike Gartner was traded on June 22, 1996, for the fourth time in his career as the Maple Leafs sent him to the Phoenix Coyotes for a fourth-round draft pick. Gartner scored 44 goals and 90 points in 142 games with the Coyotes, the final two seasons of his Hall of Fame career. The Maple Leafs used the draft pick to select Vladimir Antipov, who never played in the NHL.

On that same day, the Stars traded defenseman Kevin Hatcher to the Penguins for fellow blueliner Sergei Zubov. He played 839 games over the next 12 seasons in Dallas and played a key role in their 1999 Stanley Cup Championship. Zubov was inducted into the Hockey Hall of Fame in 2019.

On June 22, 2000, the Edmonton Oilers named Craig MacTavish as their new head coach, the eighth in team history. He succeeded Kevin Lowe, who was promoted to general manager after the departure of Glen Sather. MacTavish spent the next eight seasons behind the bench in Edmonton, going 301-252-103 and taking them to the 2006 Stanley Cup Final.

On June 22, 2021, Cole Caufield became the first Canadiens rookie to score at least eight points in a single postseason since defenseman P.K. Subban in 2010 (one goal, seven assists). He accomplished the feat with his third goal of the playoffs in the second period of Game 5 against the Vegas Golden Knights in the Western Conference Final.

On that same night, Caufield and Jesperi Kotkaniemi became the first NHL teammates 20 years old or younger to each score a goal in a game in the third round of the playoffs since Sidney Crosby and Jordan Staal for the Pittsburgh Penguins in Game 2 of the 2008 Eastern Conference Final against the Flyers.