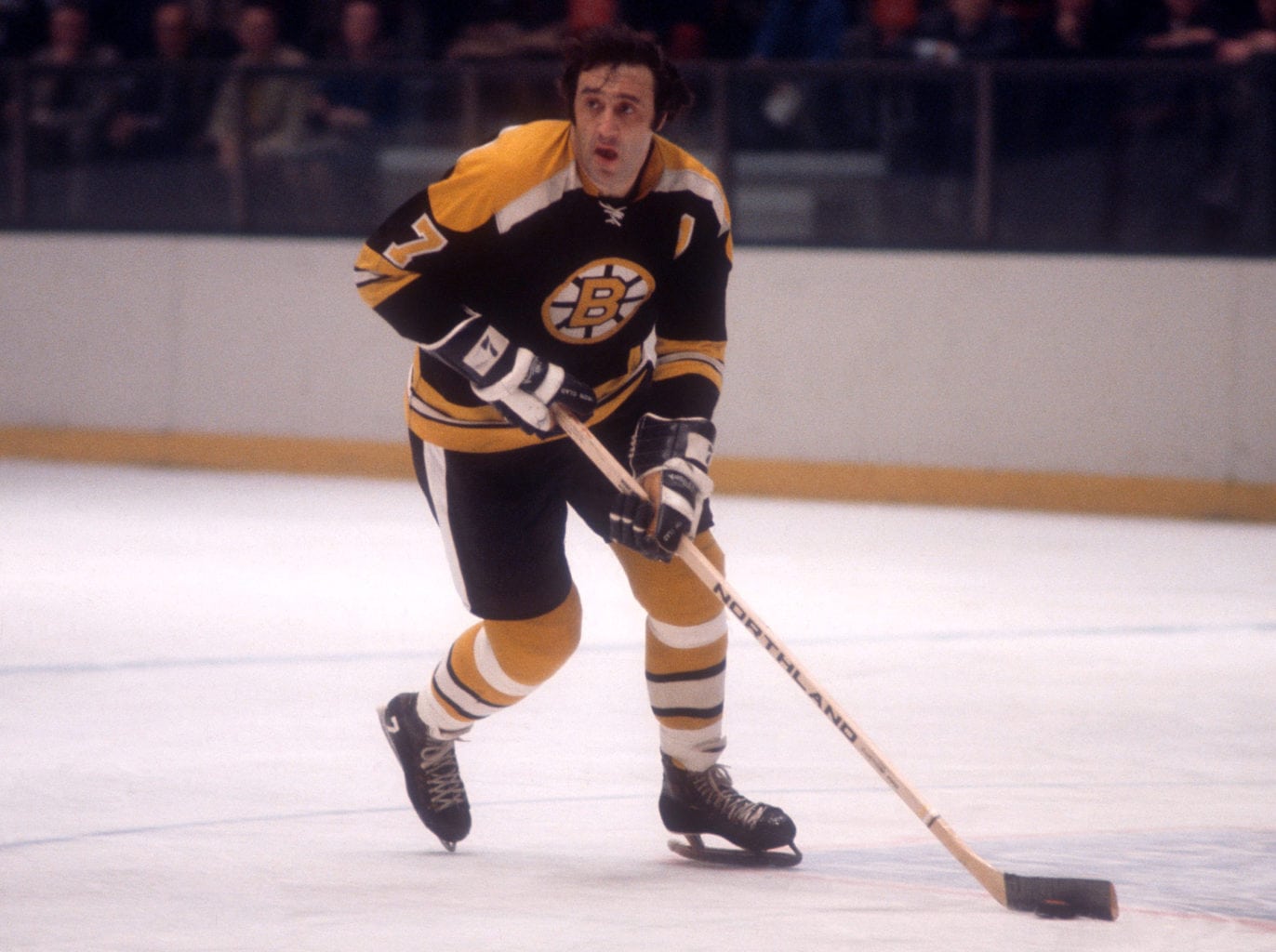 Nov. 9 has been a very eventful day through the decades. A pair of the most successful brothers in National Hockey League history made their mark on this date. Also, a handful of long streaks both began and came to an end, and some of the all-time greats in Toronto and Montreal had memorable nights. So, let’s take our daily journey back in time to relive all the best moments.

Nov. 9 was a pretty successful date for Phil, and Tony Esposito throughout both of their Hall of Fame careers.

The fun started on Nov. 9, 1969, as Tony picked up his second shutout of the season in the Chicago Blackhawks 9-0 blowout of the Toronto Maple Leafs. Stan Mikita scored the 12th hat trick of his career and added an assist while Jim Wiste set a team record with four assists in the third period. Esposito went on to set an NHL rookie record with 15 shutouts during the 1969-70 season.

On Nov. 9, 1972, Phil scored two goals and added three assists in the Boston Bruins’ 8-3 win over the visiting Detroit Red Wings. His linemate, Ken Hodge, racked up five assists in the winning effort.

Finally, on Nov. 9, 1997, Phil scored two goals and added a pair of assists to lead the New York Rangers to an 8-4 win over the Buffalo Sabres. The four-point performance gave Esposito 1,354 points, making him the second-highest scorer in NHL history behind only Gordie Howe. He retired with 1,590 points, which still have him ranked 10th on the all-time scoring list.

The Edmonton Oilers beat the Washington Capitals 8-5 on Nov. 9, 1984, as Wayne Gretzky had two goals and four assists, and Jari Kurri picked up his 11th career hat trick. The Oilers set a new NHL record for the longest unbeaten streak to start a season as they improved to 12-0-3. They broke the record previously held by the 1943-44 Montreal Canadiens.

On Nov. 9, 1989, Peter Stastny scored his 16th career hat trick and added an assist to lead the Quebec Nordiques to a 7-5 win over the New York Islanders. This victory snapped Quebec’s franchise-record eight-game losing streak.

Nine years after setting their NHL record, on Nov. 9, 1993, the Oilers picked up a 4-2 road victory at the Red Wings. The win ended both their team-record 14-game winless streak and 11-game losing streak. They entered the game with just one tie and 13 losses in their previous 14 games.

The Anaheim Ducks beat the Canucks 6-0 on Nov. 9, 2006, to break the Oilers’ NHL record by picking up a point in their 16th straight game to start the season. Their record-setting start to the 2006-07 season didn’t go to waste as the Ducks won the Pacific Division on their way to the first and only Stanley Cup championship in franchise history.

On Nov. 9, 1974, Orest Kindrachuk scored the first penalty shot goal in Philadelphia Flyers’ franchise history, on just the team’s second attempt in seven-plus seasons in the NHL. He beat Capitals goaltender Michel Belhumeur during a 6-2 Flyers’ win at the Spectrum.

Erik Cole became the second player in NHL history to be awarded two penalty shots in the same game on Nov. 9, 2005. He scored on his first attempt but missed the second to help lead the Carolina Hurricanes to their franchise-record eighth win in a row by beating the Sabres 5-3. Mud Bruneteau of the Red Wings was the last player to get two penalty shots in a game on Nov. 24, 1938, and missed both attempts.

A Big Day in Toronto

Charlie Conacher became the first player in Maple Leafs’ history to score 100 goals on Nov. 9, 1933, in a 6-1 win over the Bruins. He scored exactly 200 goals in his nine seasons in Toronto before being traded to the Red Wings in 1939.

Syl Apps scored the fourth of his six career regular-season hat tricks on Nov. 9, 1946, to help beat the Rangers 4-2 at Maple Leaf Gardens.

One year later, on Nov. 9, 1947, goaltender Turk Broda recorded his 38th career shutout in a 6-0 road win in Detroit. He retired in 1952 with 61 shutouts, which are still the most in franchise history.

On Nov. 9, 1974, Ron Ellis scored twice to become the fifth player in franchise history to score 250 goals. The milestone came in a 7-5 loss at the Minnesota North Stars. Ellis is now one of nine players to score 250 goals for the Leafs and is still fourth all-time with 332 tallies.

Wendel Clark, one of the most popular players in team history, had himself a huge night on Nov. 9, 1996. He scored four straight goals and added an assist in the Maple Leafs’ 7-3 win over the visiting Oilers.

The legendary “Punch Line” had a massive night on Nov. 9, 1944, in the Canadiens 9-2 blowout of the Blackhawks. Maurice Richard scored his fourth career hat trick and added two assists. However, he had the fewest points of the trio as both Elmer Lach, and Toe Blake had six points. Lach had a pair of goals and four assists, while Blake scored a goal and recorded five helpers.

Claude Provost scored the fastest goal to start a period in NHL history on Nov. 9, 1957, when he lit the lamp just four seconds into the second period of the Canadiens 4-2 win over the Bruins. He still holds the record, but he shares it with Denis Savard and James van Riemsdyk.

On Nov. 9, 1974, Steve Shutt scored his first career hat trick as the Canadiens beat the visiting Canucks 4-3. He scored 10 regular-season hat tricks and one in the playoffs during his 13 seasons with the Habs.

The National Hockey League announced that it had granted a franchise to Atlanta on Nov. 9, 1971, who began play as the Flames in 1972-73. They quickly unveiled their new motto: “The ice age has come to Atlanta.” They spent eight seasons in Atlanta before relocating to Calgary in 1980.

Hall of Famer Johnny Bucyk became the seventh player in league history to score 1,000 career points on Nov. 9, 1972, in the Bruins 8-3 win over the Red Wings. He hit the big milestone by scoring a goal and picking up an assist.

Gilbert Perreault had a goal and an assist on Nov. 9, 1983, to help the Sabres beat the Bruins 3-1. His two-point performance made him just the 14th player in NHL history to accumulate 1,100 career points.

Craig MacTavish scored the final goal in NHL history by a player not wearing a helmet on Nov. 9, 1996, in the St. Louis Blues’ 3-2 win in Calgary. MacTavish was the last player left in the league who was “grandfathered” into not wearing a helmet when they became mandatory at the start of the 1979-80 season for all incoming players.

Roman Cechmanek became the first goaltender since 1938 to have each of his first two career victories be shutouts on Nov. 9, 2000, in the Flyers 2-0 win against the Oilers. He had picked up his first victory and shutout five nights earlier.

Luc Robitaille scored the only goal on Nov. 9, 2001, in the Red Wings’ 1-0 victory over the Ducks. He became just the 13th player in league history to score 600 goals. Goaltender Dominik Hasek made 19 saves to pick up his first shutout with Detroit.

Jaromir Jagr scored the 766th, and final goal of his career on Nov. 9, 2017, as the Flames beat the Red Wings 6-3. This was the only goal he ever scored for Calgary. He also had an assist for the 540th multipoint game of his career. Only Gretzky had more in NHL history with 824.