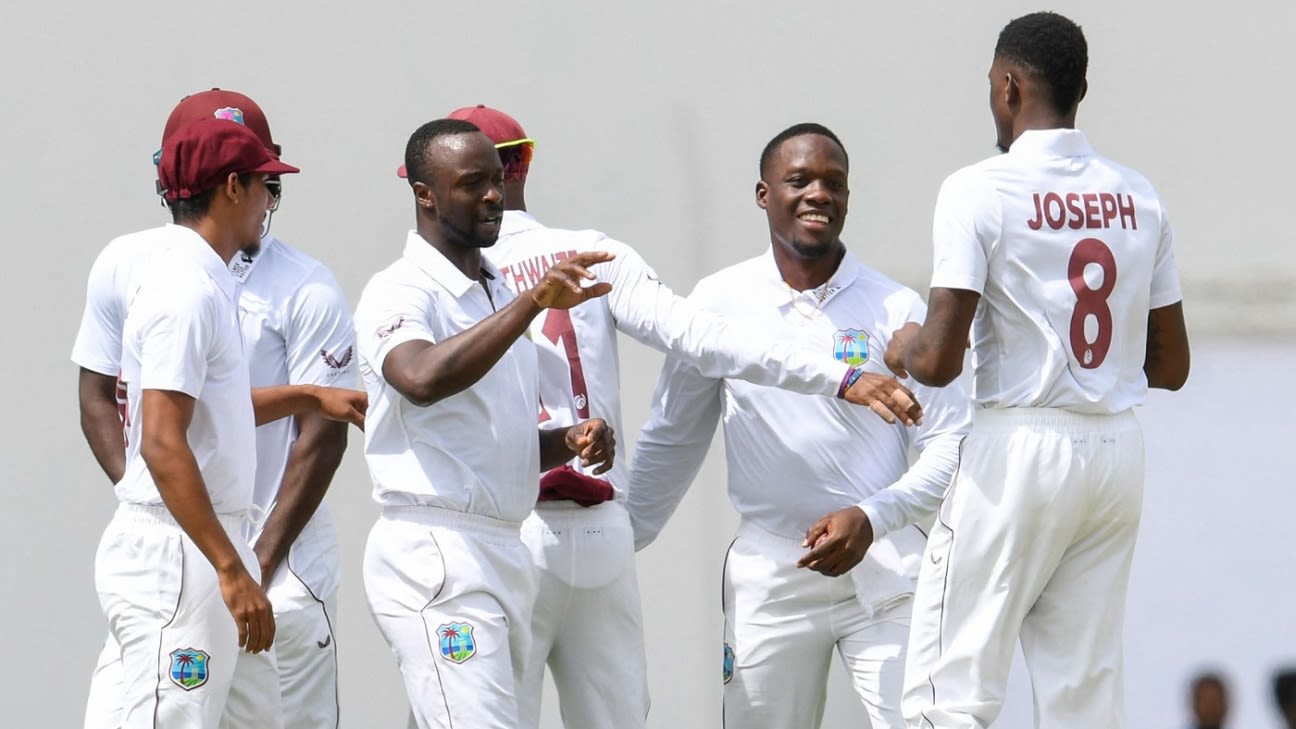 Bangladesh gained another share of an unwanted record on Thursday when six players were out for ducks in their paltry first innings of 103 on the first day of the first Test against the West Indies. Of the seven instances in which there have been six ducks in a Test innings, Bangladesh now are responsible for three, including in the first innings of their previous Test against Sri Lanka last month.
Bangladesh owed almost half their first innings total to captain Shakib Al Hasan who made 51. Veteran opener Tamim Iqbal made 29 and Litton Das made 12 as the only other players to reach double in a depleted batting lineup. The innings lasted only 32.5 overs.
The West Indies fast bowlers were outstanding on a brown first day pitch, which occasionally provided uneven bounce. Captain Kraigg Brathwaite called for the heavy roller between innings and West Indies comfortably reached 95 for 2 by stumps. Braithwaite was 42 not out and Nkrumah Bonner was on 12.
After West Indies opted to bowl at the Sir Vivian Richards Stadium, Jayden Seales took 3 for 33 from 10 overs while Alzarri Joseph returned the same figures from 8.5 for a career-best haul. Kemar Roach, who passed the fitness test a day before, began the decline of the Bangladesh innings with two early wickets and finished with 2 for 21, while Kyle Mayers took 2 for 10 from five overs.

“It was a pretty tough pitch to bowl on in terms of finding a length,” Roach said. “It was very slow at the beginning so obviously you want to be a bit fuller. There were some rough patches there and some ridges and such that we wanted to hit as much as we can.

“I think we did that pretty well. Shakib batted well for his 50 but overall the bowling group did a pretty good job today.”

“It’s always best to bowl here in Antigua with the movement, the lateral, sideways stuff. To bowl well and bowl them out after lunch is fantastic.”

Bangladesh always faced an uphill task, coming into the match after a home series loss to Sri Lanka. They were in trouble from the start, when they lost Mahmudul Hasan Joy for a duck on the second ball of the day, bowled by Roach, before Najmul Hossain Shanto fell without scoring in Roach’s second over.

Mominul Haque also fell for a duck when Bangladesh were on 16 in the sixth over. Tamim and Litton provided some brief resistance before Tamim was out with the total 41 for 4, having batted for just over an hour.

Shakib reached his half century, with little support, from 64 balls with six fours and a six. He was out with the total 103, caught in the deep by Roach off Joseph’s bowling. The innings ended shortly after lunch.

Braithwaite and John Campbell put on 44 for West Indies’ first wicket before Campbell was out for 24 and Raymon Reifer fell for 11 to leave the hosts 72 for 2. Braithwaite anchored the innings and allowed West Indies to reach stumps within sight of a first innings lead.