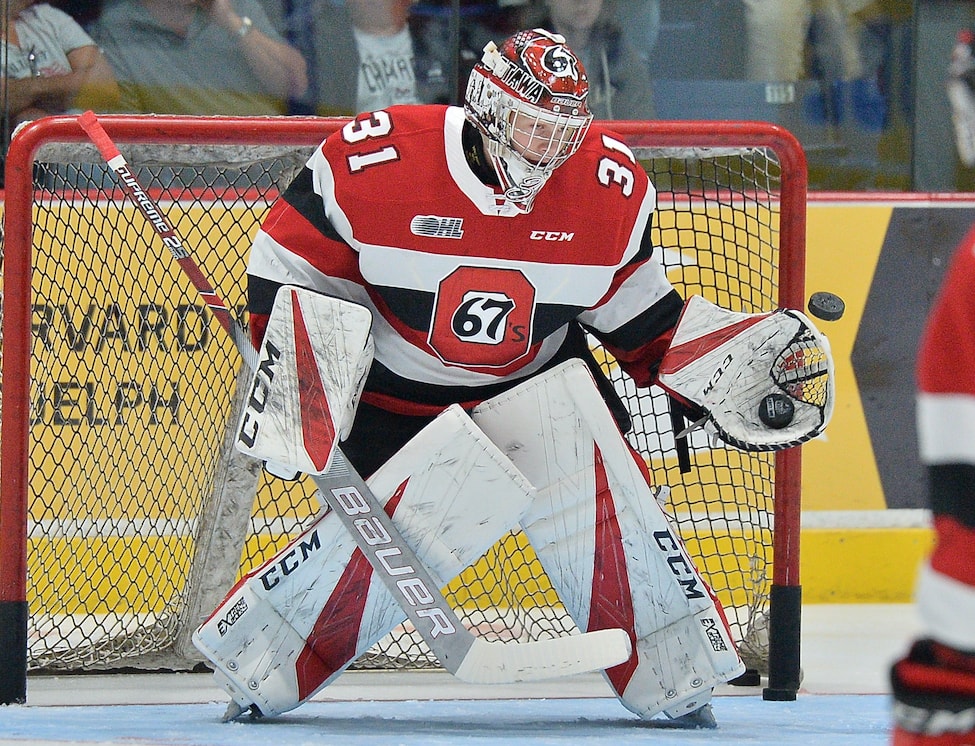 For a potential late-round selection at the 2020 NHL Draft, Will Cranley has many of those traits that general managers look for in a goaltending prospect. At 6-foot-4, he already has the size of a starter, and once his frame fills in, he will be a truly intimidating presence in net.

However, despite being that big, Cranley moves surprisingly well on the ice. He is able to use his athleticism to cut off scoring angles and he knows how to take full advantage of his body to make the net look small.

While playing in a backup role on a loaded Ottawa 67’s team that was the class of the OHL throughout the 2019-20 season, Cranley made the most of his limited playing time. In 21 starts, he went 18-2-0-0, posting a 2.81 goals-against average, a .894 save percentage, and four shutouts.

For a player with so many of the intangibles that the NHL loves, Cranley is not projected to be a particularly high draft pick. Many see him as a fringe selection in 2020, putting him in the sixth round at best, with others believing he may have to wait until 2021 to hear his name called.

Given how the NHL works, it seems unlikely that Cranley is not, at the very least, a seventh-round selection this year. There should be at least one general manager willing to take a chance on someone with his size and toolkit at that point in the draft.

Cranley possesses some of the characteristics that NHL scouts drool over. First and foremost is the 6’4” size. But for a big goaltender, not only does he move exceptionally well, he is also very acrobatic.

Everyone knows that there’s no more difficult position to project in the NHL than goaltending, especially when it comes down to a player in the later rounds of the draft. For his part, Cranley already possesses the intangibles of an NHL-caliber goaltender, meaning that in five years or so, he could develop his skills to match his size and become a full-blown starter.

At the very least, Cranley has the potential to be vying for a starting AHL role in a few years, which isn’t a bad outcome for a potential sixth or seventh-round selection.

If Cranley is still available in the seventh round of the NHL draft, there really is nothing for a franchise to lose by taking a swing on him. At the worst, he becomes one of the many seventh-rounders who just couldn’t break into the league. At the best, he provides needed goaltending depth at the AHL or even NHL level.

In many ways, Cranley smacks of one of those prospects that people look back on in a year and wonder how they fell through the cracks as they get selected in the third or fourth round. So, while he may be far from a refined player right now, there’s really no risk in taking a chance on him in one of the later rounds.