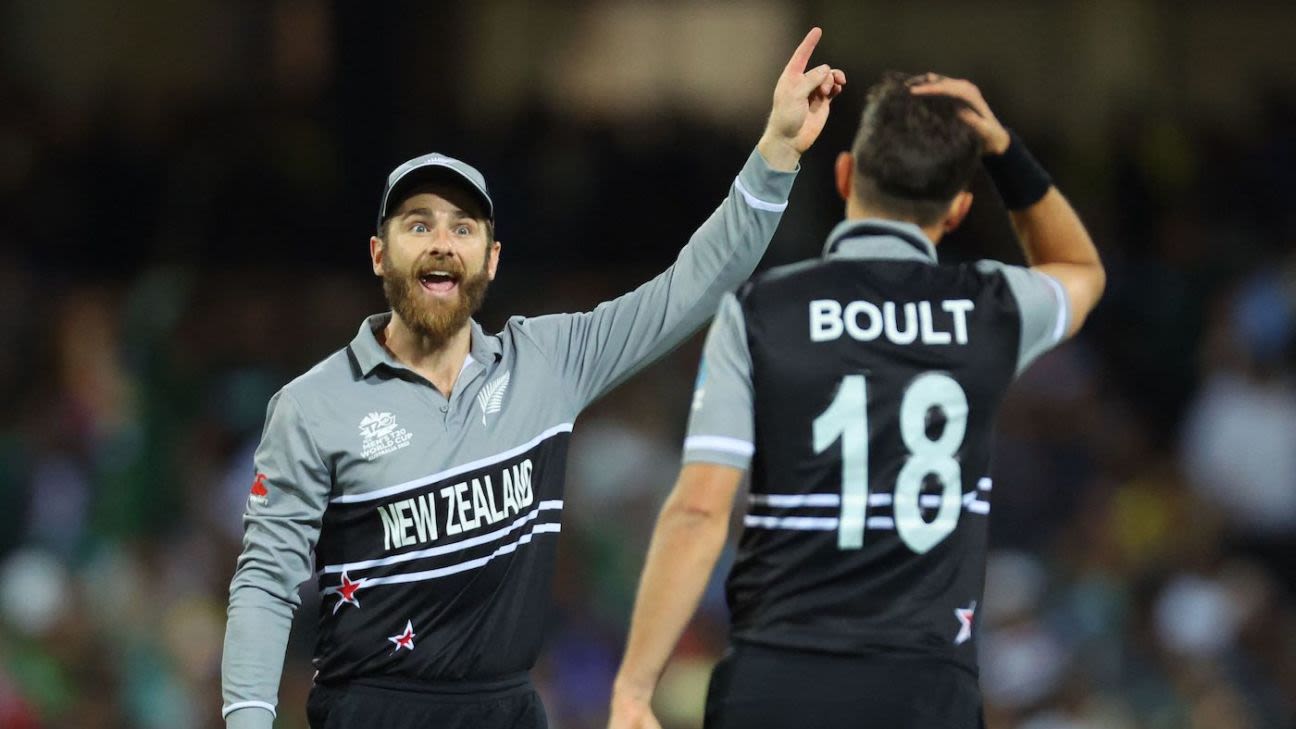 There seems little doubt that he will captain the side in the ODI World Cup in India next year – New Zealand’s next opportunity to end their wait for a major limited-overs trophy – but the T20 position may be a more vexing issue.

It had already been bubbling away for much of this year ahead of the tournament in Australia as Williamson struggled for fluency on his return from an elbow injury. He ended the event with a respectable return, his 178 runs making him New Zealand’s second-highest scorer although his strike-rate remained a regular theme.
His run-a-ball 40 against England came in for particular scrutiny but he responded with 61 off 35 balls against Ireland. In the semi-final against Pakistan he made 46 off 42 deliveries, attempting to nurse his side through from a tricky start, before falling trying to accelerate. He only struck two boundaries although one was a crunching pulled six over the leg side.
Williamson came into the World Cup on the back of a strong innings in the tri-series final against Pakistan and is actually on the brink of his most prolific international year in the format, although his overall strike-rate is 119.00 for 2022, following a figure of 117.32 in 2021.

Like a number of teams involved in this tournament there is only a short turnaround before New Zealand are back in the field again with a T20I series against India starting on November 18. It would seem unlikely that any major decisions are taken that quickly.

“I certainly love playing in all the formats,” Williamson said. “There’s a lot of cricket, and so that needs to be managed a little bit. It’s a changing landscape with players all around the world at the moment, and we’ve seen it in our camp as well. After these sorts of events you sort of sit down and give yourself a chance to reflect and sort of look at what’s coming up.”

The changing landscape referenced by Williamson particularly relates to Trent Boult whose New Zealand future now faces uncertainty following his decision earlier this year to opt out of his central contract. Colin de Grandhomme also recently retired having decided to take up a BBL deal with Adelaide Strikers. New Zealand cricket has shown adaptability and pragmatism when it comes to the IPL but could be vulnerable to the expanding franchise world.

Boult has a BBL deal with Melbourne Stars from mid-December followed by an ILT20 deal with MI Emirates meaning he won’t be available for the tour of Pakistan.

However, he remains available for selection and could feature against India, but it was indicated when he made the decision that post this World Cup would be the starting point for the new relationship. He had another good tournament with eight wickets at 18.50 and an economy of 7.40 although his two wickets in the semi-final against Pakistan came too late to make a difference. It might have been a different story if Devon Conway had held a first-ball edge from Babar Azam.

Boult has previously stated his ambition to play the ODI World Cup next year and hopes to add to his 78 Tests.

Beyond the limited-overs visit by India this month, New Zealand’s home season includes two Tests against England in February then a three-format tour by Sri Lanka in March and early April. As has been the case in previous seasons, the matches late in their summer will likely be missing those players with IPL deals.