The Winnipeg Jets are experiencing a season the pundits predicted they would have had in 2021-22. Currently, in second place in the Central Division, they have turned some heads and are a vastly improved hockey club. One of the big questions going into the season centred around the play of Blake Wheeler and how he would respond to the changes brought about by new head coach Rick Bowness. Despite being publicly embarrassed in the off-season, he has answered the call and is now playing at a level worthy of his hefty contract.

Being stripped of the captaincy just before the start of the regular season has not harmed Wheeler’s game whatsoever. At the time, he got asked how that event would affect his play and approach to the game, and he replied, “I don’t need a letter on my jersey. There was a time in my career where that validation was important to me. I don’t need that anymore. If you think that because of this, I’m just going to fade into the back and not be a leader on this team, you’re sorely mistaken,” (from “Wheeler stripped of C”, Winnipeg Free Press, 16/10/2022).

Wheeler has held to his word. He is playing at a level you would expect from a guy with a contract of $8.25 million per season. Currently playing two minutes per game less than he had under previous head coach Paul Maurice, Wheeler is thriving. His stats are a validation of this, as he has embraced his new role.

When some wondered if he would play with a chip on his shoulder and become a liability for the Jets, he has shown just the opposite. Teammate Connor Hellebuyck agrees, “he’s just been on fire. His workload and work ethic was so good and so strong. When he’s playing the right way, he’s just dominating play. We all know what kind of player he is. When he gets in that rhythm, honestly, he works twice as hard as everyone else on this team. There is not a bad thing that I could say about the guy. He’s just on fire. Keep feeding him. He’s just been in the right spot at the right time. He’s playing really solid defence and I appreciate that a lot from him.”

Wheeler Is Producing to His Contract

At 36 years of age, many thought it was time for Wheeler to be dropped to the third line and be used as a checker, but the numbers don’t support that. Despite the Jets’ poor play last season, and Wheeler’s incredibly slow start, he still was near a point-per-game player with 60 points in 65 games after being one of the Jets’ best players in the latter part of the season.

In today’s NHL, point-per-game players cost in the $8 million range, and regardless of what Wheeler’s critics claim, he’s producing to that level. Yes, at his age he has lost a step but the numbers don’t lie. Last season it took him 21 games to score his first goal. Meanwhile, this season, he scored a hat trick in his 21st game, giving him seven goals to date. 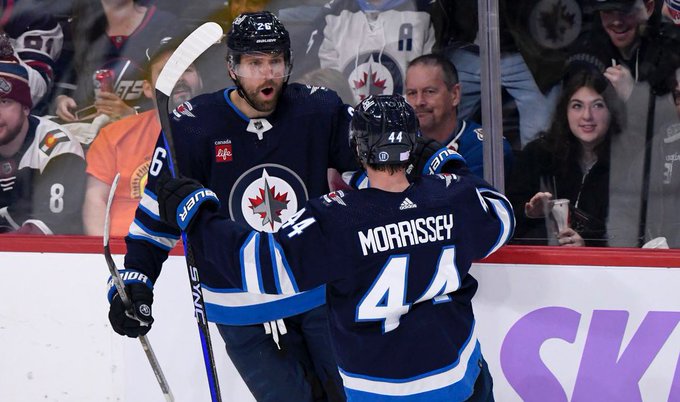 At seven goals and 15 assists, he has recorded 22 points in 23 games and again is on a point-per-game clip. His point totals have him tied for 13th amongst all NHL right-wingers, and of those, he is seventh when it comes to right-wingers, who have a positive plus/minus rating. Well worth the money True North is paying him.

Age and being old are relative. Unfortunately, being 36 in the NHL automatically puts you in the conversation of being long in the tooth. Wheeler is ignoring that fact and playing some of the best hockey of his career. He capped his excellent play with a three-goal performance in the Jets’ 5-0 shutout of the defending Stanley Cup champion Colorado Avalanche.

Man oh man. Blake Wheeler, what a performance. The man is turning back the clock on Father Time.

Consider the fact the man is well above the average age of an NHL player, recently had his captaincy removed, is now playing two minutes per game less than he was in previous years, and according to his coach, has been playing some of his best hockey of late. That is the definition of thriving. It is also the definition of leadership.

Wheeler stepped up when many thought he would fold. It’s not in his nature to quit, and it’s been to the Jets’ benefit having him play this free and with confidence. He’s on pace to score 78 points, besides an injury, he will be a key component for the Jets moving forward. He has played the cards he has been dealt well, facing the adversity of a new coach, new system and age with grace, and has flourished. The Jets would be in a quandary without his contributions on and off the ice.

Keith Forsyth is a freelance writer and sports junkie from rural Manitoba who is covering the Winnipeg Jets for The Hockey Writers.  Keith loves all sports and is a huge fan of the NFL (Skol Vikings… if you know, you know) and the Montreal Expos (they’re coming back… you watch!). He recently retired from the education world teaching high school, where his greatest passion was coaching young athletes.  He brings that same logical, behind the bench type of approach to you as he delivers an insightful look into the NHL and specifically the Jets.  For interview requests or content info, follow Keith on Twitter or his social media accounts.  They appear under his photo on articles like this one.